The Achievement system allows players to accomplish set goals in OMD!U. Some of these achievements are easy to accomplish, but some will take some time. They are fun and many have rewards. You can find them on the profile page and check their progress. They are tied to Steam and PSN achievements in the respective versions.

Dashboard Achievements are completed within the Dashboard, they are related to the workshop in form of upgrading traps or also related to Chest opening and daily logins. 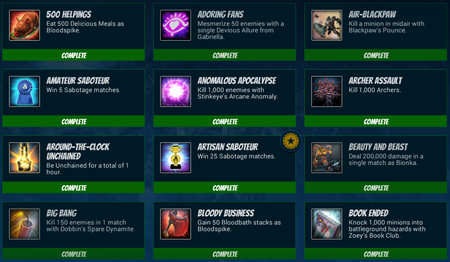 General Achievements are the ones of a more general character that don't fall directly into the In Game or Dashboard categories. They englobe more global goals like winning a set amount of matches in certain modes or earning many stars.

In Game Achievements are those that their goals are completed in matches but aren't Hero specific. This category contains achievements that have as goals the use of certain mechanics like killing a set amount of enemies, using Consumables, using environmental Traps, spending Coins, picking powerups, etc

Kills category contains only the achievements which goals are the killing of Enemies in any way, hero specific or not.

Sabotage achievements are the ones that are completed within the Sabotage mode. Those include using certain Consumables or winning Sabotage matches.

Heroes achievements are the collection of Achievements that require the usage of a specific hero in order to complete them. They are mostly about using certain abilities or killing Enemies in a somewhat more specific way.

Stars category consists of the Achievements that require the players to collect certain stars in different Survival difficulties and in different ways. 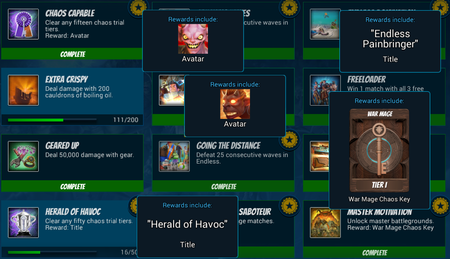 Some Achievements and their rewards

Achievements have many different rewards. They range from cool and fun Vanity for your account on your dashboard like Titles or Avatars to content unlocking in form of Survival Chests of all difficulties, Apprentice, Warmage, Master and Rift Lord and different difficulty Chaos Trials Keys too. Also some achievements have as rewards Infinite Consumables for Sabotage.