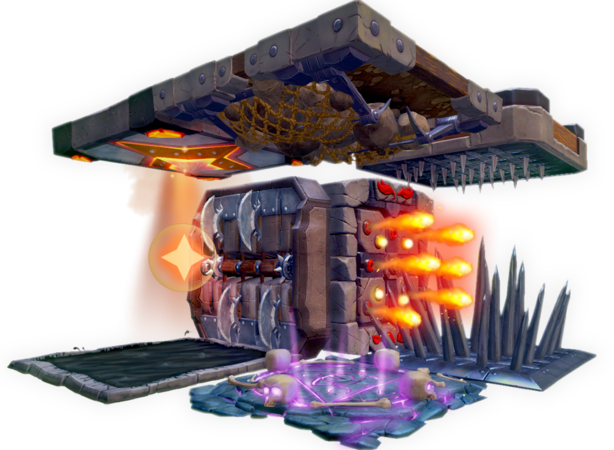 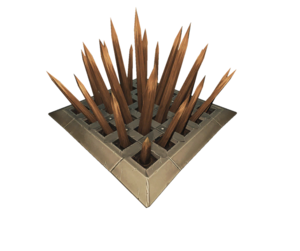 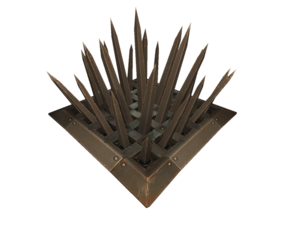 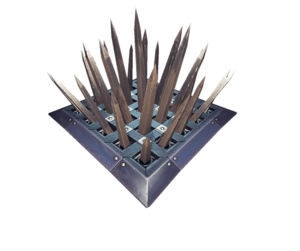 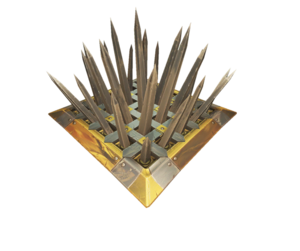 The bread and butter of orc-gibbing and ogre-slaying. Traps come in a variety of types that can be configured into any number of clever, carnage-inducing combinations. Different Traps can be placed in different surfaces: Floor, Walls or Ceiling.

Every player begins with the same set of starter Traps and a basic Loadout. Additional Traps and items for the Loadout are obtained from reward Chests, earned when victory conditions are met. The first time a trap card is obtained, that trap becomes available for use in the loadout. Every following time that trap card is obtained, additional cards will be added to the card stockpile until the upgrade threshold is reached.

Killer killboxes require quality Traps! Get the lowdown on how to earn, upgrade, and add parts to your Traps to customize their behavior.

Bring a relatively even mix of floor, wall, and ceiling Traps to help build strong killboxes and earn high combos. Don't forget those Barricades! Also get to know the Battlegrounds. Some offer great opportunity to fling orcs into acid, or lava, or shark-infested waters! Knowing which Battlegrounds benefit from physics or other specialized Traps is key for maximum orc-gibbing fun.

There are different type of traps, some are purely focused on supporting your hero, others in pushing/flipping minions out of the map and the rest are focused in dealing Damage. Barricades are a special trap, since they allow to change the path the enemies follow to reach the rift. Damage dealing Traps are split in Physical damage traps and Magic damage Traps, which are also split in the diferent Elements damage: Frost, Lightning, Fire and Arcane.

Traps can also be bought in the Store with Skulls at the Deals section or with gibs in the Premium Shoppe through the Traps Chest. It's advised against buying Traps from the Deals section until late game to prevent lacking of skulls to buy Heroes or upgrade Traps.

Traps begin at tier 1 and have 7 available tiers. With enough trap cards and skulls, a trap may be upgraded in the workshop. The quantity of cards needed for each upgrade depends on the rarity of the trap and the upgrade tier.

Each upgrade makes the trap more powerful. At tiers 3, 5, and 7 Traps unlock one part slot for further customization. As the difficulty of each Battleground tier increases, these trap upgrades and parts become more and more important.

The upgrades also cost Skulls and the costs vary depending on the rarity of the Trap, the different costs can be seen in the table in the right side.

Once a trap is fully upgraded, further duplicate cards of that Trap are converted to Gibs:

Barricading Traps main goal is to help the players create mazes and more efficient killboxes. Their placement allows to redirect Enemies path. They can be destroyed from collateral damage and/or from Minions that directly attack them.

There are only 2 types of barricades:

Physics Traps are special traps that are able to send Enemies flying away. Small and Medium Minions are flipped, pushed or simply sent flying away, while in the air or ragdolling, Enemies freeze their Combo timers. Enemies thrown out of the Map will instantly die.

Large Enemies will trigger this traps but they won't be affected by them.

Support Traps have a different goal than regular traps, they focus on supporting and boosting the player in different ways. From regenerating HP and mana to giving extra damage, defense or movement speed to the Heroes. They don't deal any damage to enemies and their effects are reusable indefinitely. Some are activated by proximity, others drop Pickups.

Support Traps are the following:

Big Game Hunting Traps or BGH, are three special traps that only deal damage to Hunter Minions, Bosses, Mercenaries and Unstable Rifts. They are incompatible with Heavy Pressure Plate and Light Pressure Plate

Regular Minions won't trigger this traps but can possibly take damage if they block projectiles aimed at susceptible targets (not very usual).

Environmental Traps are special and unique traps that unlike the rest, aren't owned or placed by the players, they are built-in the maps. There are different types of Environmental Traps, some of them have unlimited uses, others just a single use, most can be triggered by player attacks, others can be activated with the Function key too.

The most important Environmental Trap is going out of bounds. Falling out of the Map or into acid, lava or shark infested waters will instantly kill any player or enemy. That makes a great synergy with Physics Traps that can make enemies fly or throw them out of the map.

The common Environmental Traps are:

There are also special Environmental Traps unique to certain maps: